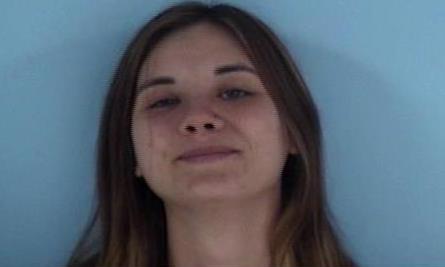 SANTA ROSA BEACH, Fla— A woman arrested for trafficking a hallucinogen is locked up a second time just hours after bonding out.

March 6th just before 10 pm, a Walton County Sheriff’s K9 Deputy pulled over a blue Toyota FJ Cruiser hauling a U-Haul trailer for speeding on U.S. Highway 331 South. When the deputy approached the car, he noticed a strong smell of marijuana coming from the vehicle.

During the stop, the deputy used K9 Drago to conduct a free air sniff of the vehicle and trailer. Drago gave a positive alert and a search was conducted.

During the stop in which Adkinson was arrested for the second time, K9 Drago sniffed out:

The driver was identified as James Sanders, 30, of Santa Rosa Beach and Stacey Adkinson, 21, of Ponce de Leon was the passenger.

Just hours before, Adkinson was booked into the Walton County Jail on an active warrant for trafficking in LSD and using a two-way communication device to commit a felony. She was given a $25,000 bond and re-arrested following the traffic stop.