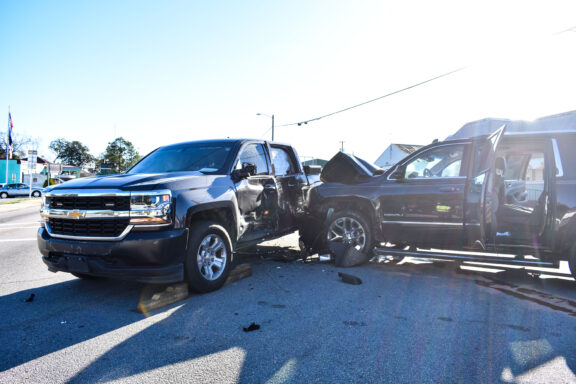 Just before 7:30 am, the WCSO Lieutenant was driving north on Highway 83 through the intersection of Highway 90 when he was hit by a GMC SUV.

After the SUV slammed into the driver’s side of the patrol vehicle, six individuals fled the vehicle on foot. Five were quickly apprehended while one more was later detained. The GMC came back as stolen out of Vero Beach, Florida.

The lieutenant was transported to an area hospital and Florida Highway Patrol was called in to investigate the crash and the stolen vehicle.

“We were fortunate we had a lot of deputies in the area on their way to training who were quickly able to get everyone in custody,” said Sheriff Michael Adkinson. “We are monitoring our employee’s status and appreciate the outpouring of support from the community.”

Shortly after the crash, it was discovered the individuals were involved in a home invasion where they forced their way into a home on Bruce Avenue and pepper-sprayed two children and hit another victim over the head with a bottle.

Walton County Sheriff’s Office has turned the suspects over to DeFuniak Springs Police Department who is continuing their investigation into the home invasion.