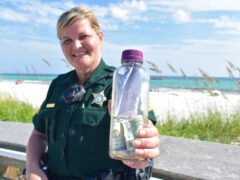 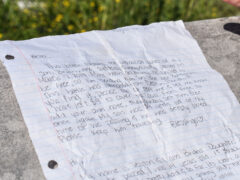 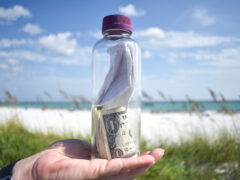 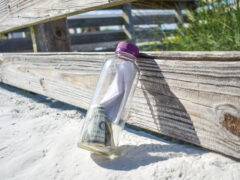 “This bottle contains the ashes of my son, Brian, who suddenly and unexpectedly passed on March 9, 2019. I’m sending him on one last adventure.”

Those were the first words Sergeant Paula Pendleton read when she carefully unfolded a note from inside a glass bottle found on a Walton County beach.

The bottle, which had been sitting in the passenger seat of her patrol car for most of the morning, was initially reported to Walton County Sheriff’s Office as found property. Inside was a small bag containing ashes and four $1 bills.

Sergeant Pendleton would later agree, it was fortuitous the message would to find her.

“Hi, my name is Peyton,” was written in a second note on the wrinkled page. The folds and torn edges serving as a testament to the journey the bottle had already made to the beautiful beaches along 30a. “I am Brian’s daughter. When my father passed, I was 14-years-old. It has struck our whole family pretty hard and, so far, it has been a very hard road. But, like my granny said, he loved to be free. So, that’s exactly what we are doing.”

Scrolled in ink under the messages from Brian’s mother and daughter were emails and phone numbers to contact the family. They wanted to know where his journey would take him.

“Who would have known when it washed up on our shores it would have gotten to me?”, Pendleton smiled.

Pendleton is no stranger to loss. The widowed deputy lost her husband in April 2018 when he suddenly fell ill and passed away just weeks later. He was just 50-years-old.

“He died with me at home,” said Pendleton. “It was all very sudden.”

She continued reading the letter which read, “If you find it, please call or text me and let me know, then kindly set him free once again.”

Sergeant Pendleton had a break in the calls for service and reached out to the family through text.

“I am putting the note back into the bottle with Brian’s ashes and delivering it to a friend who is a charter boat captain,” she wrote to them. “He has offered to bring Brian way out into the Gulf so he can continue his adventure. But, before that, I want you to know he got to do a ride-a-long with a deputy before drifting out once again.”

Finders isn’t always keepers for Sergeant Pendleton who admits she didn’t so much find Brian – as he found her.

Brian is set to begin the next phase of his adventure on Friday, September 6th.