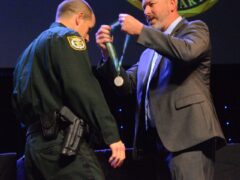 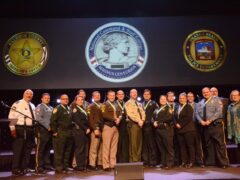 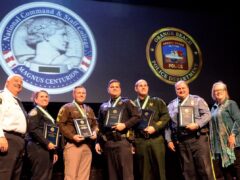 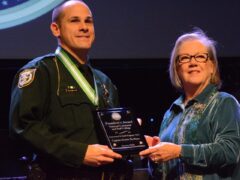 The Class, sponsored by the Orange Beach Police Department and Baldwin County Sheriff’s Office, is comprised of a 240 hours online portion and an 80 hour residency component and focuses on effectively resolving the challenges of an accomplished career.

Graduates of the program leave with new colleagues, a diverse array of faculty from which the student can continue to consult, and ways to act ahead of change to create an optimistic future for law enforcement and the communities they serve.

The long-term goal of the program is to add to the leadership skill sets of each participant; it is also to contribute to the body of knowledge of law enforcement through the completion of significant foresight-based research.

On Friday, course graduates of Session #014 received a National Command & Staff College diploma and a MAGNUS CENTURION Medallion at the ceremony held in Orange Beach, Alabama.

The first was the Capstone Research Award, which is determined by a combination of written and oral communications skills and a project that exhibits a highly-defined team effort.

Additionally, Captain Burlison received the President’s Award, which is given to someone who demonstrates leader and learner responsibility and accountability early in the program and throughout. This person connects leadership theory with real-life leadership practice.

Walton County Sheriff’s Office would like to congratulate Captain Dustin Burlison and all graduates of Session #014.