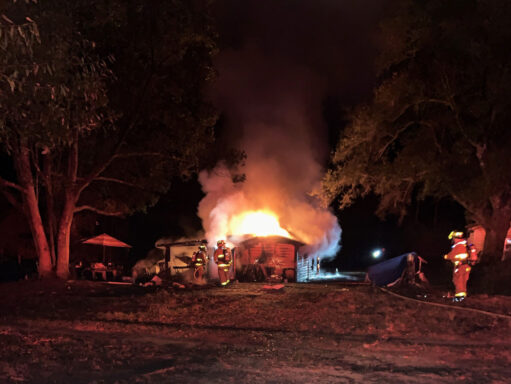 The Walton County Sheriff’s Office and Walton County Fire Rescue were called to a home on Kylea Laird Road just after 9:30 p.m. on Tuesday, February 16, 2021 following a 911 call from a passerby who saw flames coming from a building near Freeport Middle School. Deputies and firefighters arrived on scene within minutes to find flames and heavy smoke coming from a large shed behind a home that had been turned into a guest house.

Firefighters quickly made entry into the home and began extinguishing the flames. Within less than five minutes, Walton County Fire Rescue crews had the fire knocked down, keeping the flames from spreading to the nearby home. One body was located in the burned structure.

The State Fire Marshall’s office responded to investigate the cause of the fire in conjunction with Walton County Sheriff’s Office investigators. The fire is not believed to be suspicious in nature.