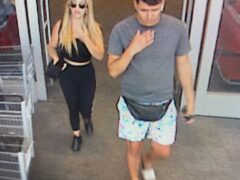 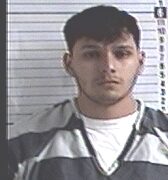 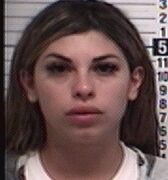 WALTON COUNTY, Fla— Burglary suspects who broke into a car while the victims enjoyed the beach have been arrested in Bay County.

The burglary occurred sometime between 2:30 pm and 3:30 pm on August 15th on Seabreeze Trail in Inlet Beach. The suspects entered the victim’s vehicle and took two backpacks, a wallet, and a purse.

The suspects disabled the lock on the driver’s side door to get into the vehicle. The backpacks and purse contained the ID and several credit cards belonging to three separate victims along with a small amount of cash.

“This is a very rare occurrence in our county,” said Sheriff Michael Adkinson. “We still want to encourage our residents to lock their doors and take their belongings – don’t leave anything in plain sight.”

An investigation revealed the suspects used the stolen credit cards at Publix, Walgreens, and Target located in Panama City Beach.

Video surveillance obtained by Walton County Sheriff’s Office Criminal Investigators Bureau shows a male and female using the stolen cards. WCSO Criminal Intelligence Division was able to match the suspects to a rental vehicle in the area at the time of the burglary.

A BOLO (be on the lookout) was created and information was passed on to the Bay County Sheriff’s Office. The two suspects, identified as Katherine Gutierrez, 28, and Adrian Diaz Rodriguez, 26, were taken into custody at the Golden Coral on 23rd Street in Panama City.

Inside their vehicle was the property from the victims in Inlet Beach.

The two now have active warrants out of Walton County for burglary and grand theft from a motor vehicle. They are currently facing charges in Bay County related to the use of the stolen credit cards and will be extradited following their sentences.