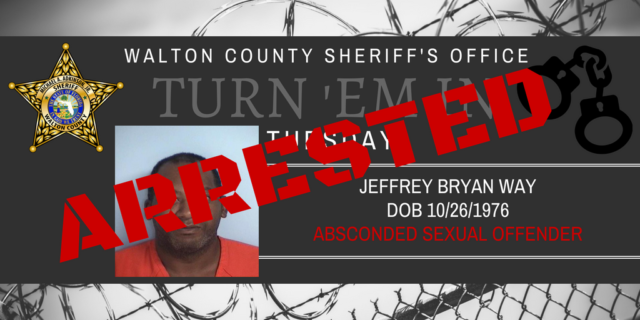 Absconded sex offender, Jeffrey Bryan Way, was located and arrested without bond early this morning by DeFuniak Springs Police Department on felony failure to report name or residence change and misdemeanor child support charges. Thanks to an anonymous tip, Mr. Way found his “way” back behind bars.

We go “way” back with Mr. Way, and we’re looking to catch up with him because we haven’t seen him in a while. You know, to have a little chat with him about the way the law works.

Jeffrey Bryan Way, 41, is an absconded sex offender, currently wanted for failure to register a new address. We’ve had quite a few run-ins with Mr. Way. He has previously been arrested on a slew of charges including domestic violence, burglary, and battery. So, he is no stranger to the Walton County Sheriff’s Office.

Anyone with information on the whereabouts of Mr. Way is asked to call the Walton County Sheriff’s Office at (850) 892-8186 or you can remain anonymous by calling Emerald Coast Crime Stoppers at (850) 863-TIPS. Submit a web tip at http://www.emeraldcoastcrimestoppers.com/or send a mobile tip using the P3 Tips Mobile Application.