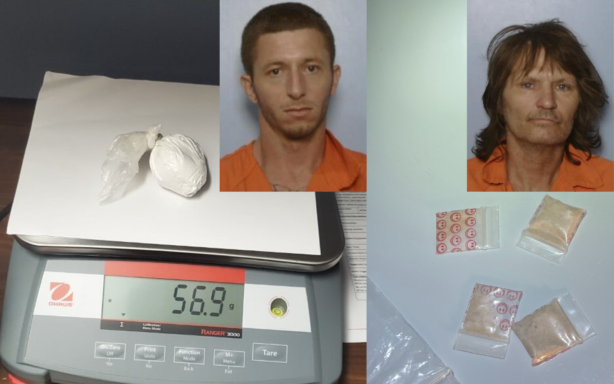 Over 60 grams of fentanyl and heroin are taken off the streets following two separate traffic stops by the Walton County Sheriff’s Office.

On September 21st, Walton County Sheriff’s Office deputies and VICE/Narcotics investigators conducted a traffic stop on a white sedan near the intersection of Persimmon Street and Cedar Avenue in Choctaw Beach. During the traffic stop, the driver, Jonathon Scott Hataway, 28, was found to be in possession of 27 grams of marijuana and 57 grams of fentanyl.

Two weeks later, on October 8th, deputies pulled over another white sedan near the intersection of US Highway 98 West and Old Blue Mountain Road. The driver of the vehicle, Michael Wayne Hand, 53, was found to be in possession of four small bags of a powdery substance, which he later told deputies was heroin.

Both men were subsequently arrested and transported to the Walton County Jail.

Hataway is facing two felony drug charges: trafficking in fentanyl and possession of marijuana over 20 grams. He was released on a $50,000 bond.

Hand was charged with possession of heroin with the intent to sell. He was released on a $15,000 bond.