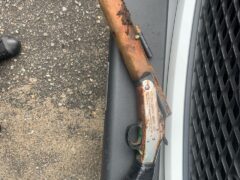 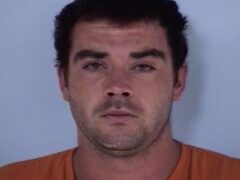 WALTON COUNTY, Fla— A man charged by Okaloosa County Sheriff’s Office for accessory to murder after the fact is also facing weapons charges in Walton County.

On July 10th, Johnny Ray Kirk shot and killed an 80-year-old man at a park in Crestview located in Okaloosa County. Okaloosa County Sheriff’s Office prompted a manhunt for Kirk which carried over into Walton County.

The following day, the vehicle belonging to the victim of the Okaloosa homicide was located off of Linda Lane in DeFuniak Springs by members of the U.S. Marshals Task Force and members of WCSO.

Intelligence was gathered that several individuals including Michael Lawson, 24, of DeFuniak Springs assisted Kirk after the incident by giving him a ride out of Walton County. Information collected also indicated that Lawson had a sawed-off shotgun in his possession before leaving town with Kirk.

The night of July 11th, Escambia County located a vehicle with Kirk, Lawson and others inside. After a shootout with deputies, John Kirk was fatally wounded, and Lawson took off on foot. Lawson was located the following day and arrested by ECSO.

On the morning of July 13th deputies with Walton County Sheriff’s Office located the shotgun that Lawson tossed out of the car before leaving town.

Lawson is facing charges of displaying a weapon during the commission of a felony, possession of a weapon by a convicted felon, and possession of a short-barreled shotgun.  He is currently incarcerated at the Okaloosa County Jail.