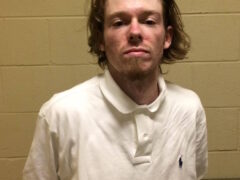 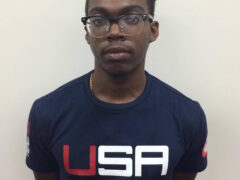 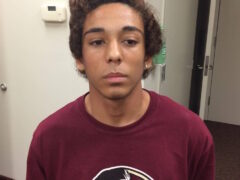 Miramar Beach, Fla— Three suspects under the age of 20 are behind bars following a retail theft that led to a foot pursuit and the confiscation of two weapons.

Just before 6 o’clock Monday evening a Walton County Sheriff’s Office Deputy was performing a security check at Silver Sands Outlet Mall when he was flagged down by employees from Sunglass Hut in reference to three suspects who had just stolen $600 worth of sunglasses and fled in a black vehicle.

The deputy canvassed the area and located the vehicle near South Shore Drive. After initiating a traffic stop the deputy approached the vehicle and immediately smelled an odor of marijuana. The deputy escorted the driver, Jonathon Clark Longe, 20, from the car. While putting the driver in custody the two remaining passengers in the car attempted to flee.

After a short foot pursuit Jakeem DeWayne Peoples, 19, was apprehended with a fully loaded 9mm handgun in his waistband. The weapon returned as stolen out of Crestview. The second passenger 15-year-old Darien Isaiah Hallmon, led deputies back to Silver Sands where he was apprehended.

Upon search of the vehicle a second weapon was found concealed under the front passenger seat. In addition, deputies located powdered cocaine in individuals baggies, scales, and stolen merchandise from Ralph Lauren, Sunglass Hut, and Adidas.