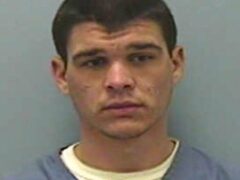 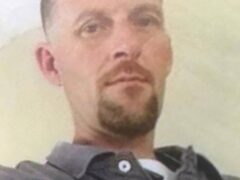 WCSO is currently searching for Timothy Edward Vignolo, 32, and Joshua Graves, 38, for the KM Jewelry Store burglary that occurred April 29th. The two men are believed to be in the Talladega area.

Deputies responded to 12889 U.S. Highway 98 W just before 11 p.m. Saturday following a 911 call from the store’s owner. The caller said he fired an unknown number of shots and may have hit one of the suspects before they both fled the scene on foot.

The incident was captured on surveillance video and the suspects were wearing black masks and hoodies. The videos showed two suspects breaking in the door and entering; one to the left and one to the right. They break the display cases using a hammer and the other with a crowbar. While they begin to take jewelry out of the cases the victim comes around the corner firing an unknown amount of shots.

As one subject exits the store, he drops a pillowcase with the items he attempted to steal. When discovered by investigators at the scene the pillow case still had creases indicating  it was recently purchased. After calling around to local businesses investigators identified where the items were purchased and pulled surveillance video. Footage revealed two men who were later identified as Vignolo and Graves.

“This is just great investigative work,” said Sheriff Michael Adkinson. “A pillowcase cracks the case and now we are that much closer to making an arrest.”

If you have any information on the whereabouts of these two men you are asked to call your local law enforcement agency or Walton County Sheriff’s Office at (850)-892-8111. You can also submit tips anonymously by calling Emerald Coast Crime Stoppers at (850) 863-TIPS. Submit a web tip at www.emeraldcoastcrimestoppers.com or send a mobile tip using the P3 Tips Mobile Application. You could be eligible for a cash reward.

.@WCSOFL needs your help finding two suspects of a jewelry heist that was all caught on camera. #LivePD pic.twitter.com/1kjMRfiITi