DOG FOUND WITH CARABINER THROUGH ITS NECK; WCSO SEARCHING FOR OWNER 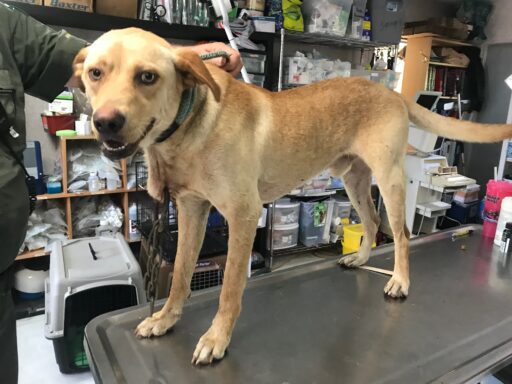 DEFUNIAK SPRINGS, Fla— Walton County Sheriff’s Office is asking for the public’s help in locating the owner of a dog found with a carabiner pierced through its neck.

July 19th, Walton County Animal Control responded to a call for an injured dog that was discovered by a resident on Dogwood Road. The caller noticed the dog under his trailer but said the dog would growl when he tried to approach it.

When Animal Control Officers arrived they noticed the dog, a yellow lab, with a carabiner through the skin on its neck and a chain hanging from it.

Walton County Sheriff’s Office has surveyed the neighborhood and attempted to locate Woodrow’s owner. After exhausting all possible leads, WCSO is asking for the public’s help in identifying the person responsible.

“In releasing the photo of the dog’s injuries, we are hoping a someone will come forward with information,” said Sheriff Michael Adkinson. “These injuries did not happen by accident.”

In addition, Alaqua Animal Refuge is offering a $500.00 reward to anyone with information that could lead to an arrest.