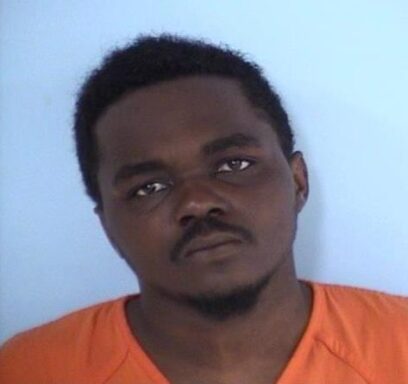 Deputies responded to the Loft Apartments on Red Bud Lane after a victim reported he and his wife were walking back to their apartment around 2 am and found a male suspect rummaging through their vehicle.

Sanderson was later apprehended by responding deputies in a swampy area off U.S. Highway 98 about 200 yards from the east side of the complex without one of his shoes. Sanderson told deputies he was on vacation and fled the area because he saw law enforcement. He denied any responsibility for the burglary.

“In this instance, the victim got the best of the suspect,” said Sheriff Michael Adkinson. “While we encourage residents to be vigilant and secure their property, we caution confronting a criminal who could be armed. The risk is not worth your life.”

Deputies canvased the area and identified a total of six vehicles that had been burglarized with numerous items stolen including sunglasses, electronics, and cash. Witnesses noticed several vehicles leave the area and more suspects are believed to be involved.

Sanderson was transported and booked into the Walton County Jail on multiple charges including burglary with battery, grand theft, five counts of vehicle burglaries, criminal mischief, and petit theft. More charges are expected and additional suspects are being sought at this time.

Walton County Sheriff’s Office wants to encourage residents to prevent these type of occurrences from happening; HIDE your valuables, LOCK your car, TAKE your keys.