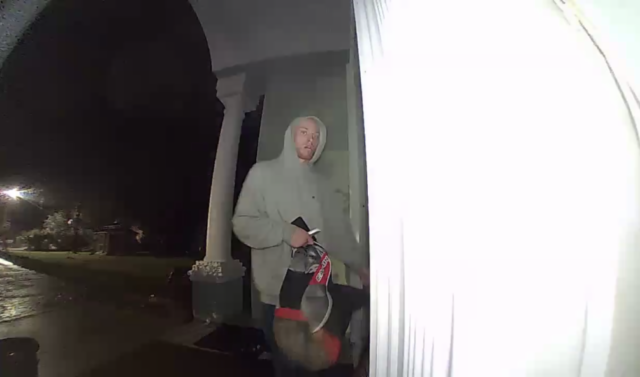 On Tuesday, February 25th two men were captured on video surveillance attempting to enter through the front door of a home off Hamon Avenue.

Between 2:56 am and 3:38 am, the subjects removed items within the residence after breaking into a back window and can be seen using the front door to bring stolen items to a vehicle. 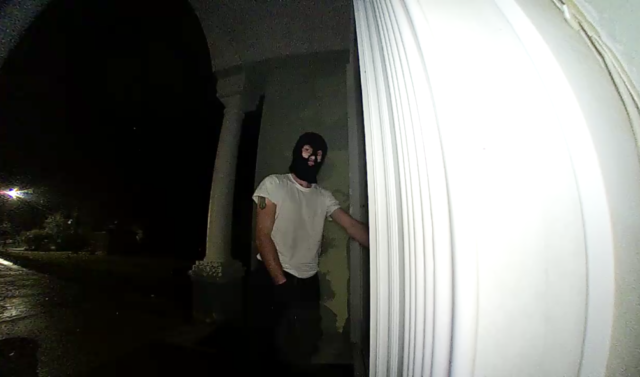 While removing items from the home, the subjects became armed with swords, making this an armed occupied residential burglary.

Other items taken from the home include a briefcase with sermons from the last 20 years. The home’s owner is a pastor as a local church.

Walton County Sheriff’s Office is asking for the public’s help in identifying these men. One of the subjects in the video appears to be a male wearing a black mask who has a distinctive tattoo, possibly a cross, on his upper arm. The other is described as a white male with red facial hair wearing a gray hooded sweatshirt.

Anyone with information regarding the identity or whereabouts of these two men is asked to call the Walton County Sheriff’s Office at (850) 892-8186 or you can remain anonymous by calling Emerald Coast Crime Stoppers at (850) 863-TIPS. You can also submit a web tip at http://www.emeraldcoastcrimestoppers.com/ or send a mobile tip using the P3 Tips Mobile Application or the Walton County Sheriff’s Office smartphone app. You could be eligible for a cash reward if the tip leads to an arrest.