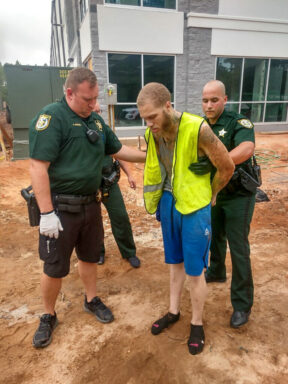 Santa Rosa Beach, FL— A carjacking suspect wanted after a multi-agency pursuit is now in custody.

Willie Robertson, 24, was wanted by the Walton County Sheriff’s Office and the Panama City Beach Police Department for fleeing and eluding following a pursuit June 2nd. Robertson was being sought by Tennessee authorities in connection with an armed carjacking.

Robertson and Makiya London, 19, were spotted in a stolen vehicle in Bay County Wednesday afternoon. When Panama City Beach police initiated a traffic stop, the pair fled into Walton County. Spike trips were attempted on Highway 98 near Emerald Coast Middle School causing Robertson to crash on the shoulder of the eastbound lanes.

Law enforcement officers found London hiding in the woods that afternoon and she was taken into custody. London was charged with obstruction without violence and possession of a controlled substance as well as out-of-county warrants.

After hiding in the woods for nearly five days, Robertson was seen walking down Highway 98 near Serenoa Road in Santa Rosa Beach Monday morning. Deputies responded to the area and quickly detained Robertson who was severely dehydrated.

“Our citizens and deputies have remained vigilant in searching for this suspect,” says Sheriff Michael Adkinson. “We hope our community can rest a little easier knowing he is in custody.”

Robertson was transported to a local hospital where he is currently receiving medical treatment.

According to Robertson, he and London were the only two in the vehicle at the time of the pursuit. More information regarding charges is forthcoming.