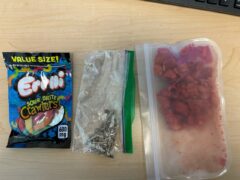 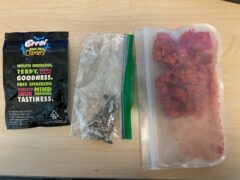 WALTON COUNTY, Fla— A student from Emerald Coast Middle School is facing felony charges after providing drugs to his friends while on the bus to school.

The Walton County Sheriff’s Office School Resource Deputy was alerted to the incident Tuesday morning shortly after the start of school when a student went to the nurse’s office with side effects consistent with drug use.

The VICE\Narcotics Unit responded to the school. The student was identified and interviewed by deputies with a parent in attendance. The teen admitted to bringing cannabis, mushrooms, and chips – possibly laced with an unknown substance – to campus.

All parents whose children were involved were quickly notified by the School District and have since been removed from school.

At this time, there is no evidence any of the mushrooms were consumed – only edibles and chips. It’s believed this instance is isolated to a group of friends and that no other student is involved and that the drugs were acquired off campus.

The student was arrested and charged with two felony counts of possession of a controlled substance. At this time, Walton County Sheriff’s Office has chosen not to publish the student’s name on our social media channels due to the lack of criminal history.

The safety of our students is of the utmost importance to the Walton County Sheriff’s Office and our partners at the Walton County School District. This incident was quickly addressed, and further consequences will be determined by the courts and school district.