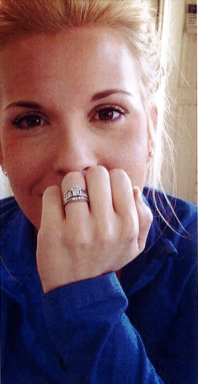 Her wedding ring was stolen while on vacation. More than a year later, a Walton County Sheriff’s Office Investigator helped her get it back.
__________
On May 21, 2018, Sophia Miller woke up in a condo off Scenic Gulf Drive in Walton County. She and her husband planned a trip to the beach for the day and packed up their things. Before heading out the door, Miller set her silver wedding ring down on the bathroom counter.
She wouldn’t see it again until more than a year later.
Deputies responded to the condo and took a report of the theft. The ring was a unique three-band set soldered together and valued at $4,000.
During the initial investigation, the owner of the rental unit reported to deputies the condominium was cleaned by a third-party company. A suspect was quickly identified as Rosalyn Mitchell, 48, of Fort Walton Beach.
Mitchell denied stealing the ring and agreed to meet deputies for an interview days after the theft, but never showed.

“I never expected to see it again,” Miller told WCSO.

Fast-forward 15 months later to August 2019. Now Investigator Chad Goleta was reviewing cases after being promoted to the Criminal Investigations Unit at Walton County Sheriff’s Office when he came across pawn activity from a suspect in a familiar case.
Goleta discovered Rosalyn Mitchell pawned a diamond wedding set on November 30, 2018, to Dan’s Discount Jewelry & Pawn in Fort Walton Beach for $250.
Hopeful, Goleta reviewed the photograph taken of the ring by Dan’s Discount Jewelry & Pawn and compared it to photographs provided by Miller.
It was the same exact ring.
Although, he didn’t need much proof. Goleta was the patrol deputy who took the initial report, spoke with the suspect, and then tried to meet Mitchell days after the theft.
He sent a picture to Miller and waited for confirmation.
“YES!! That’s it!”
Utter jubilation.

“What are the odds I was assigned the case?” said Goleta with a smile. “But, I’m glad I was able to track it down.”

Six months after failing to meet for an interview, Rosalyn Mitchell pawned the ring she denied stealing. August 15th Goleta attempted to call the suspect multiple times to no avail and a warrant was submitted for her arrest for grand theft.
On September 7th, 17 months after her ring was stolen, Miller sent a text along with a picture to Investigator Goleta.
“It’s home! God bless you for all that you have done to make this happen!”
_______________________
Rosalyn Mitchell is currently wanted by the Walton County Sheriff’s Office for grand theft.
Anyone with information regarding her whereabouts is asked to call the Walton County Sheriff’s Office at (850) 892-8111 or you can remain anonymous by calling Emerald Coast Crime Stoppers at (850) 863-TIPS. Submit a web tip at http://www.emeraldcoastcrimestoppers.com/ or send a mobile tip using the P3 Tips Mobile Application.
Records Request