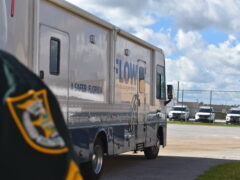 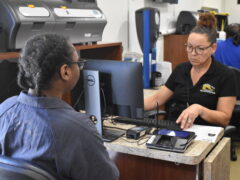 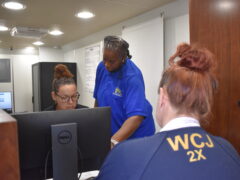 WALTON COUNTY, Fla— Inmates incarcerated at the Walton County Jail were given a special opportunity Monday.

The Florida Licensing on Wheels (FLOW) bus visited the Walton County Jail, pulling into the facility to provide qualified inmates with the chance to renew their license or get an ID card.

The FLOW program offers a one-stop convenience typically for members of the public. However, the Walton County Jail partners with FLHSMV to provide the service to inmates to help their re-entry once they are finished serving their sentences.

On Monday, 42 inmates qualified for a Florida ID card, and three were issued their Florida Driver’s License. The cost of the IDs is funded through the inmate welfare program, which derives from money spent by inmates during incarceration. These funds can only be used for inmate welfare.

“It’s an effort to reduce recidivism,” said Walton County Sheriff Michael Adkinson. “We hope this helps give inmates an opportunity to move forward quickly once they’re released from jail.”

During a previous visit to the jail back in June, more than 50 inmates were issued Florida ID cards.